As a trustee of Routes to Roots, I was very excited about Hill St Baptist Church but at the same time very aware of the huge needs associated with transforming the building to be a Place for Change. I wanted to do something that not only raised money but also actually got the issue into the wider community, rather than simply targeting those who were already supporters of Routes to Roots. I have always thought of Lent as not merely a time of giving up stuff but also giving away to others so I decided this was the perfect time to do some fundraising – little did I know how things were going to change.

I love a good cooked breakfast and I know others do too so I decided to offer this to others, but for donations to Routes to Roots. I set a target of around £300, which would cover the cost of a washing machine for the new building and I set aside three Saturday mornings in March to do this using the Church Centre at St James. I advertised via my own Facebook page and also set up a page for people to give electronically if they couldn’t be there in person. Lots of friends shared this and it was advertised around St James, the wider community, my sea swimming group and also the local Lifeboat Crew. With a team of helpers, we managed to serve over 30 breakfasts on the first Saturday and on the second Saturday, with people heeding the Coronavirus warnings, we were down to around 20. By the third Saturday we were closed down. However, we were overwhelmed with the support we got for these breakfasts. The total amount raised on the two Saturdays was just over £400. I was also very generously given a further £400 from personal donations towards Routes to Roots.

Coronavirus cut us short, but when we are out of this crisis I intend to open up the Holt Café at St James again for a few more Saturdays. I was overwhelmed with the support I received: the good will towards the cause was evident. It was a simple thing to do but the results were so much more than the money in raising the profile of the new building through our local community. A huge thanks to my willing team of helpers who served, cooked and washed up.

We were delighted to offer food on every single day of the Christmas period and 35 of our clients enjoyed a dinner with all the trimmings on Christmas Day. Radio Solent held a carol concert at St James in Poole with half of the proceeds raised being donated to R2R. Many thanks to all who gave their time and thoughts to those in need at this time. 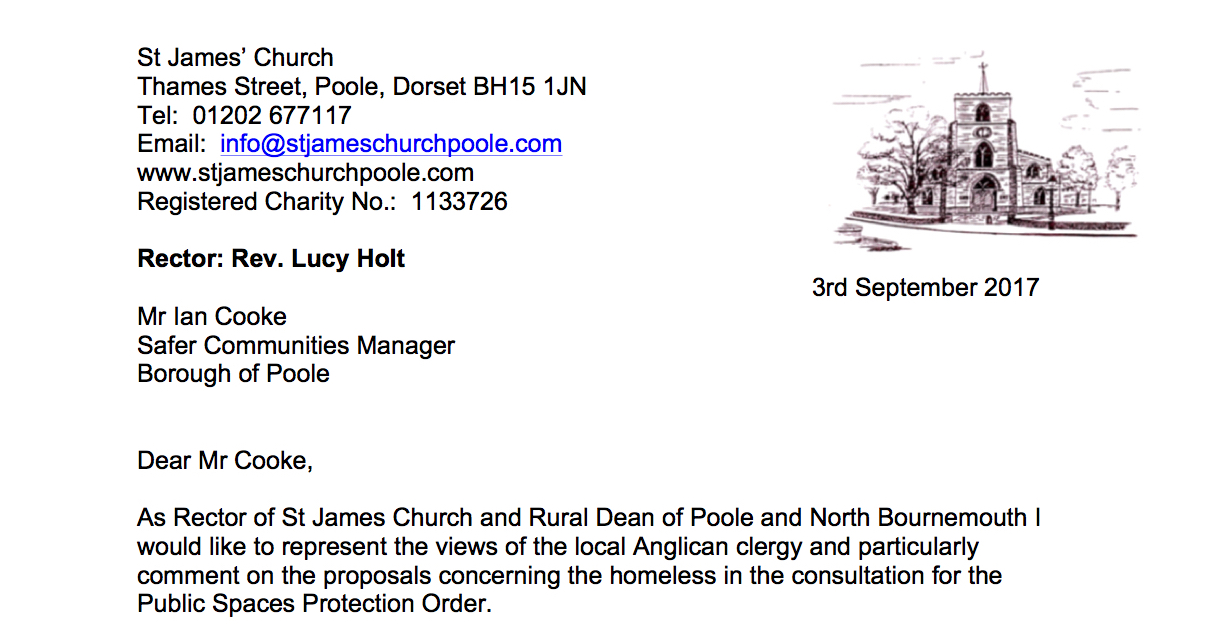 …The Churches in Poole have for many years worked together in supporting the work of the charity Routes to Roots and also the Soup kitchen for the homeless. As such they represent a key part of the provision locally for the homeless which takes place within the central town area either at Skinner Street URC or under the arches by the station. To have a policy of moving homeless on out of this local area will curtail their access to this valuable resource for them. The soup kitchens do not start until 8pm which gives little time for the users of this resource to move to an area out of the PSPO area. The provision of the proposed PSPO appears to put our most vulnerable members of our society at more risk and seems to show a lack of compassion in our community…