Key Campaign for the Homeless 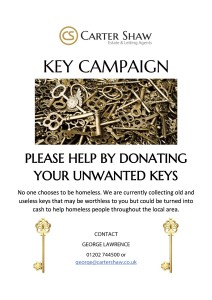 Poole Estate and Letting Agents, Carter Shaw have come up with a great idea to help the homeless. They have begun a campaign to collect old and unwanted keys to help the homeless in Poole. They have already had a good response and are hoping to roll this out as a continued campaign rather than just a Christmas idea. They have now contacted Routes to Roots to see what support they can give us. Following the launch of the campaign, they had people wanting to make cash donations, so we have sent along a collection box.